Posted on 21 April 2019 by canberraguitar

Z.o.o guitar duo – a long-time favourite with Canberra audiences, Canberra Classical Guitar Society is happy to present Z.o.o. guitar duo in recital at the Wesley Music Centre, as part of their Australian tour. A specially selected programme reflects their experiences of having left Australia for Europe some 20 years ago. A story of change, innovation, triumphs and challenges, and above all: music! Two musicians (Peter Constant and Marion Schaap) with a story to tell. Attractive, colourful and varied compositions from Australia, Holland and Estonia, also featured will be the music of Ferdinand Rebay: an Austrian composer who disappeared from the history books during WWII, and whose many recently re-discovered late-Romantic guitar works are a revelation!

Posted on 3 November 2018 by canberraguitar

Hungarian-born András Csáki is an outstanding guitarist of his generation. The magnetism and sensibility of his playing has enchanted audiences in many concert halls from Japan to North America. This is his first and only appearance in Canberra and will undoubtedly leave his audience in awe. More information about András at http://www.andrascsaki.com 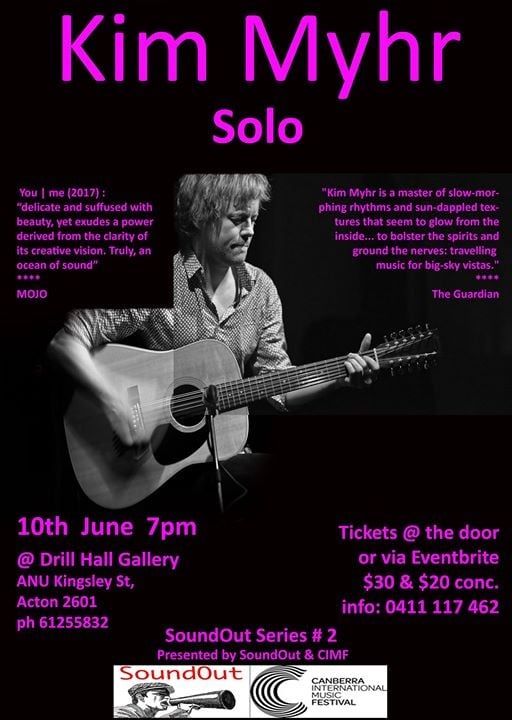 Kim Myhr is one of the leading voices of the Norwegian experimental music scene, both as a composer and guitarist. Myhr’s solo music can be described as an orchestral exploration of the 12-string guitar. He has released three solo records, ‘All Your Limbs Singing’ (2014), ‘Bloom’ (2016), and ‘You | Me’ (2017). The new release features contributions from drummers Tony Buck (The Necks), Hans Hulbækmo (Atomic) and Ingar Zach, and has received widespread critical acclaim. ‘You | Me’ also received an honourable mention at Nordic Music Prize 2018. The jury stated: “This is a sonically adventurous record, beautifully listenable and immersive but never wilfully difficult, spanning both the sound worlds of contemporary jazz guitar and modern classical music”.

Myhr is an active composer, writing for chamber ensembles, electroacoustic settings and various theatrical projects. He is premiering a new work for Australian Art Orchestra at Melbourne Jazz Festival this June, and has been performing regularly in Australia the last ten years.

Available at the door, or online at eventbrite.

A collection of the very best of Australian music for guitar and string quartet.​
Choose from one of two concerts on August 18th. Either a 3pm Afternoon Tea Matinee or a 6pm Champagne Evening Recital.

In just eight years Acacia Quartet has won great respect for their versatile and inventive programs which couple established repertoire with the unorthodox. Matt Withers – Australian Guitarist, is an ambassador for Australian music, a well-established classical guitar pedagogue, performer and role model for musicians around Australia. Each of their multiple recordings regularly feature on the likes of ABC Classic FM and in the Top-Ten Classical iTunes Charts and together, their collaboration of guitar and string quartet has garnered excitement and hype across the country. Their ‘Imaginations’ tour program will soon be recorded and licenced for digital distribution by ABC Classics. 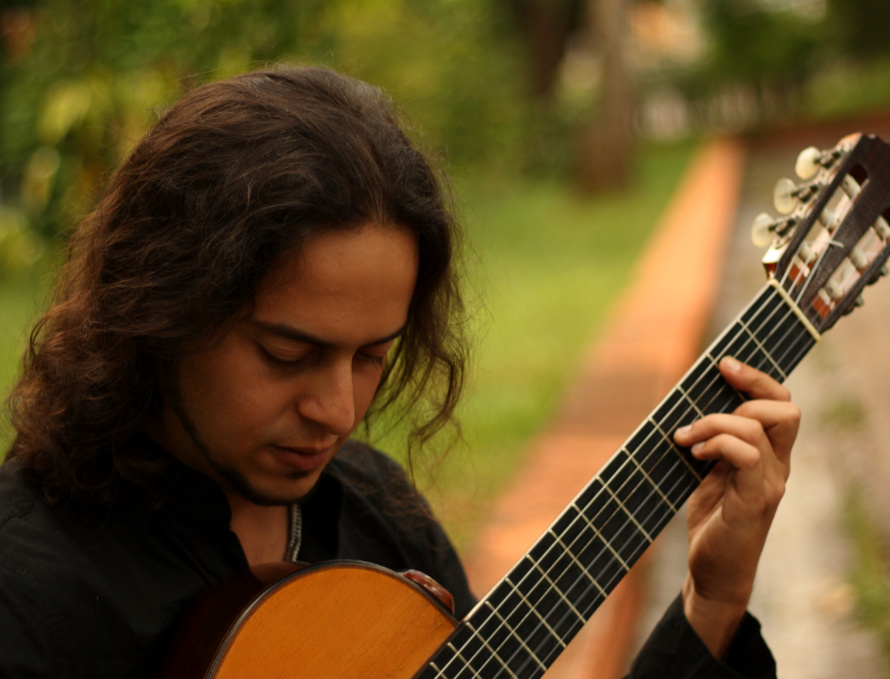 The second part is composed by Dozza’s guitar works, influenced by sounds from all over the world and different periods of music history. From the English Renaissance through John Dowland’s Pavan to Brazilian dances in Baião de Dois. From rustic dances of the British islands in Ella’s Jig to the Progressive Rock in Broken Dance.

The program will give the audience an overview of the variety of Brazilian rythms such as Choro in Villa Lobos Choro Tipico, Bossa-nova in Duas Contas, Samba in Lamentos do Morro and the Brazilian Waltz in Se ela Perguntar.

Available at the door from 7.00pm or online at trybooking.com.

“‘Wayfaring’ Album Launch
Internationally renowned musicians Karin Schuapp and Umberto Clerici first shared a stage as part of the 2015 Musica Viva Festival, where the combination of guitar and cello proved a major hit.

In 2018 they continue their critically acclaimed collaboration with a program exploring songs throughout the ages. From gentle Spanish lullabies to fiery contemporary works, from Schubert to De Fella, Clerici and Schuapp reinvent beautiful melodies with lush accompaniments for the unique and intoxicating combination of cello and guitar. The listener is taken on an emotional journey through life, with songs drawn from all over the world and from different life stages, interwoven with anecdotes about the inspiration behind these timeless melodies.

A selection of works from the programme:

Available at the door or online at The Street Theatre website.

Minh will perform a selection of Baroque, Spanish and Latin pieces for solo guitar, and a set of guitar and flute duos with Teresa.

Limited seating for 50 guests in a lovely home with a performance space and comfortable seating.  The performance will begin at 6pm and will be followed by a dinner and drinks (provided) and a chance to mingle. 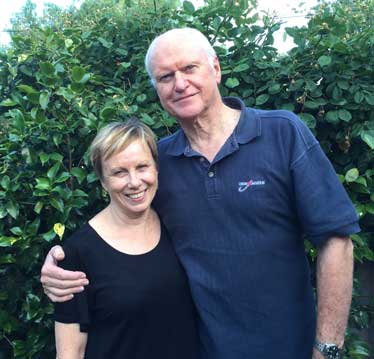 Hosts Bill and Libby want to offer opportunities for Canberra audiences to share their passion for the classical guitar, its varied and interesting repertoire and for the very high level of talent present in the region.

The residence is on a battle-axe block with limited parking.  Guests are advised to park on Cedrela Place and enter via a footpath at the front of the house.  (Map link).

New Zealand Guitar Quartet at Wesley on 31 May

In 2014, Damian Wright was invited to perform as a solo artist at The Rajasthan International Folk Festival, India, and in 2016 performed at The Shanghai Fringe Festival, China. Damian’s flamenco ensemble Bandaluzia were invited to perform at the biannual Adelaide International Guitar Festival curated by Slava Grigoryan, and performed to a sold out Sydney Opera House Concert Hall as part of TedX Sydney 2014.

“Damian Wright is a brilliant flamenco guitarist…Wright showed what a captivating solo player he is on his own “In Time”, and elsewhere his articulation of complex lines was fluid and dripping with conviction” – Sydney Morning Herald”

From publicity on the Eventbrite booking page:

“Back by popular demand, ‘Rumsey & Friends‘ presents another highly-entertaining evening of music-making! These three well-seasoned musicians will present a selection of exciting clarinet, piano and guitar repertoire! Andrew returns from his 10-month performance tour of the USA, Canada and Spain to join forces with the charismatic, Canberra-based clarinet virtuoso, Thomas Azoury and the charming, sensitive guitar-whisperer, Ciaran Edwards-McKeown.

Being friends and colleagues for nearly a decade, together they bring a tangible level of electricity and ‘Joie de Vivre’ to the stage. Sandwiched between pieces will be inspiring, embarrassing and unfortunate tales of events and happenings from their careers thus far! Get a glimpse into the joy, calamity and sheer irony that befalls some musicians!
Don’t miss out on an entertaining night of music and stories with these three trouble-makers!”

BOOKING ESSENTIAL: Limited seating for 60 guests in a lovely home with a performance space and comfortable seating. The performance will begin at 6:00pm and will be followed by a beautiful dinner and drinks (provided) and a chance to mingle.

Hosts Bill and Libby want to offer opportunities for Canberra audiences to share their passion for classical music. The residence is on a battle-axe block with limited parking. Guests are advises to park on Cedrela Place and enter via a footpath at the front of the house.

The residence is on a battle-axe block with limited parking.  Guests are advised to park on Cedrela Place and enter via a footpath at the front of the house.  (Directions and map).