Posted on 31 March 2012 by canberraguitar 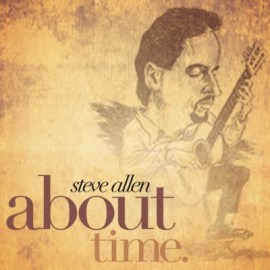 Canberra guitarist Steve Allen has just finalised his first CD About Time – a collection of pieces that represent some of the musicians who have inspired him to love making music. Tommy Emmanuel, Sting, Bach, Paco Peña and Django Reinhardt.  It covers many styles, including classical, jazz, flamenco, folk, popular music and gypsy Jazz.

Steve is a trained Classical Guitarist who has taken a swig from the hipflasks of Flamenco, Jazz, Fingerpicking and Folk. He is equally at home in a Flamenco den in Andalucía, folk festivals such as Woodford, or a concert hall.

He completed a Bachelor of Music at the Australian National University with Tim Kain, has performed as the support act for artists such as Tommy Emmanuel, James Morrison and Victor Borge, and has shared the stage with many, including: Grace Knight, Yothu Yindi, Sirocco, Margaret Urlich, Marina Prior, Rick Price, Rhonda Burchmore and Bruce Rowland (Man from Snowy River).

Steve teaches music at The Canberra Grammar School and runs 3 Guitar Orchestras there. He lives in Canberra with his amazing wife and 2 children.