Posted on 9 October 2012 by canberraguitar 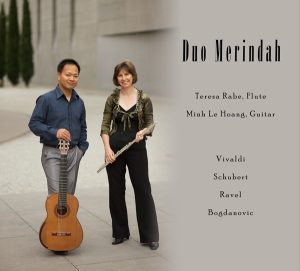 Teresa Rabe and Minh Le Hoang are two distinguished Australian musicians. Minh began playing guitar in Vietnam at age 9, Teresa the flute in Mullumbimby at age 11, going on to study with Vernon Hill and Virginia Taylor in Canberra. Minh moved to Canberra when he was 13 and studied first with Carolyn Kidd, then with Tim Kain.

Minh won first prize in the 50th Tokyo International Guitar Competition having won the Adelaide Spring Guitar Competition in 2001. As a soloist and recitalist within Australia he has given master classes and concerts for guitar societies in Sydney, Brisbane, Melbourne, Perth and Canberra. He has also given concerts in the United States and Southeast Asia and performed in master classes for leading guitarists from around the world including John Williams, Nikita Koshkin, Pavel Steidl, and Costas Cotsiolis as well as making many appearances on radio and television. In 2008 he released the critically acclaimed solo album “The Fall of Birds”.

Teresa has won the National Flute Orchestral Extracts Competition and performed concertos with the Queensland Philharmonic Orchestra, the Haydn Bande, and the Canberra Pro Musica Orchestra. She enjoys chamber music and has performed as part of the Canberra International Chamber Music Festival. Ensembles she has formed include Trio Degas – flute violin and harp – and a trio with soprano Louise Page and pianist Phillipa Candy with whom she has appeared on “Harp in the Highlands” –  a CD of Anne Carr-Boyd’s music. Teresa has performed on Sunday Live and the Young Australia programme on ABC Classic FM radio.

As Duo Merindah, Teresa and Minh have played together since 2007, appearing in major cities and regional centres across Australia. Versatile musicians, they perform a wide range of music from contemporary Australian compositions to well known arrangements of classics. Both are respected teachers developing the talents of future musicians in Canberra. Minh and Teresa teach in the Pre-Tertiary program of the Australian National University School of Music where Minh has also served as acting Head of the Guitar Department.

Email Minh for more information and where to get a copy of the CD.