Posted on 1 August 2013 by canberraguitar 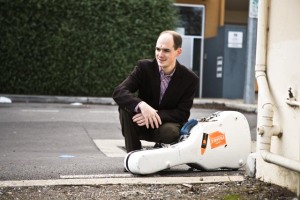 Thursday 8 August 7:30pm “An Evening with the Guitar” at Wesley Music Centre.

Harold Gretton began playing guitar at the age of 7. He completed his Bachelor of Music at the Australian National University (ANU) School of Music under the guidance of Timothy Kain with first-class honours in 2006. He completed a Ph.D at the ANU School of Music in 2010, and in that year began a “Cours de spécialisation” in duo with his wife Véronique van Durling at the Strasbourg conservatory, studying with the Duo Melis. They completed this in 2012 with “Mention très bien”.

Harold has won numerous national and international competitions, in Bratislava (2010), Vienna (2007), Cordoba (2007), Coria (2008), Transylvania (2008), Sernancelhe (2008), and Lagonegro (2006). He was awarded second prize in competitions in Tokyo (2008) and Gisborne (2005). He has also won numerous first prizes in the open guitar sections of Australian national eisteddfods and competitions.

He has been invited to perform concerts in guitar festivals all over Europe, from Portugal and Spain to Greece and Romania. He has also performed concerts in Miami and Ho Chi Minh City, and all over Australia. He enjoys playing a mixed program of both new music, including Australian works, and older classics. He has a special interest in music from the 19th Century, and performs regularly on a guitar built in 1835 by Louis Panormo.

His début CD “The 20th Century Guitar”, comprising works by Berio, José, Duarte and Edwards, is available for sale on his website.

Harold has been invited to perform as soloist with different orchestras, including the Orquestra Filarmonia das Beiras, the Canberra Symphony Orchestra, and the ANU school of music orchestra. He has performed concertos by Rodrigo, Ponce, Brouwer, Giuliani, Vivaldi, and Dodgson, and was honoured to play the first performance of a concerto by eminent Australian composer Nigel Westlake, under the composer’s baton.

Harold composes, with an always increasing folio of works mainly for guitar in mixed chamber music ensembles. His works have been performed live on Australian national radio, and have been recorded.

A dedicated pedagogue, Harold teaches privately in Strasbourg and at the Insitut Musical de Saint-Louis, where he also directs two guitar orchestras. He has given masterclasses in numerous festivals.